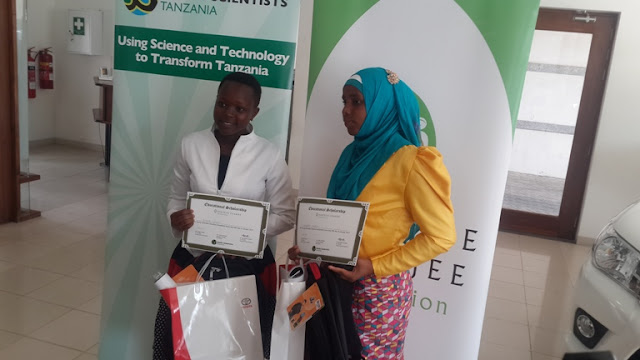 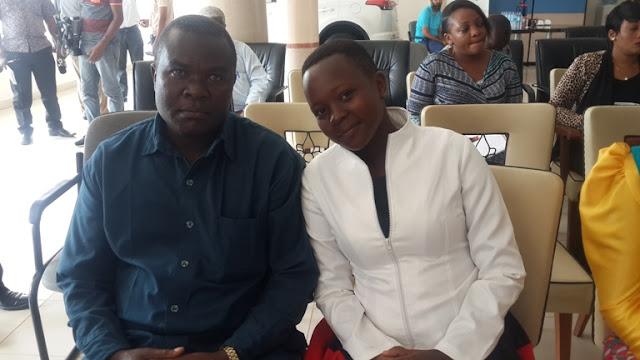 Diana and her father, Sosoka Paul 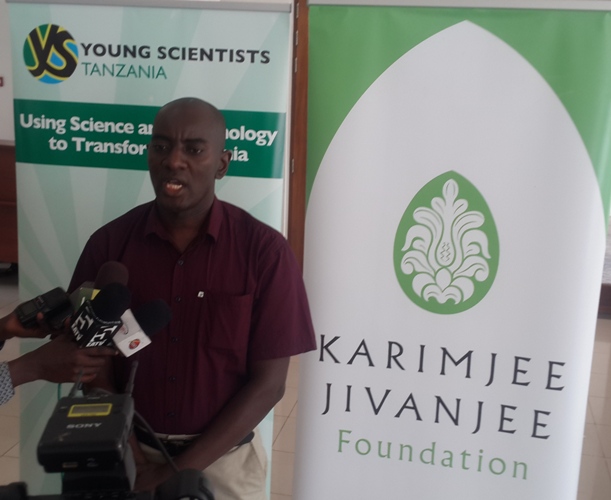 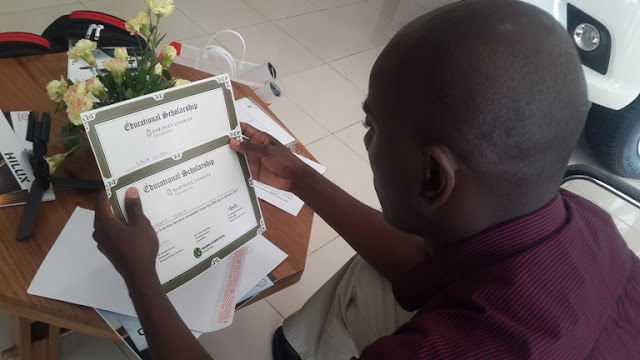 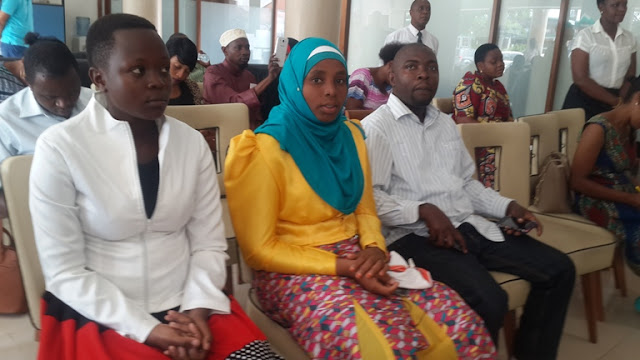 By Daniel Mbega of MaendeleoVijijini Blog
Dar es Salaam: THE Karimjee Jivanjee Foundation (KJF) has rewarded Diana Sosoka and Nadhra Mresa from Mtwara Girls Secondary School for being overall winners of the Young Scientists Tanzania (YST) Awards in 2016.
Speaking at a press event to send off the winners to Dublin, Ireland, the KJF Team said the winners would receive scholarship from the foundation to study at any local university when they complete their high school education.
They both take a combination of Chemistry, Biology and Geography and aspire to be medical doctors.
The students are travelling to Dublin today to attend the BT Young Scientists and Technology Exhibition, an Irish annual school students’ science competition, which aims at encouraging interest in science in primary, and secondary schools.
Speaking at the event, the students thanked their school teacher, Mr. Rashid Namila their Biology teacher, whom they said has been a fundamental to their success.
They also thanked the YST, led by Dr. Gozbrt Kamugisha, and the KJF for making their dreams come true.
“Our innovation was based on a locally made incubator to help the women around our school to raise chicken after seeing them come to our school every day to seek for leftovers sue to the poverty situation that has engulfed them,” they said, adding that their technology has inspired various people around Mtwara and across the country to go and learn.
Ms. Eliavera Timoth, the Foundation’s Deputy Marketing Manager, speaking on behalf of KJF Manager Ms. Devota Rubama, said KJF was a non-governmental organization that was registered in 2009 and commenced its operation in 2010 with commitment to support the Tanzanian community, specifically improving education sector.
“The education sector is the core charity notably by providing scholarships to young Tanzanians to be able to accomplish their studies at university level,” she was quoted as saying, adding that the scholarships were provided to students under the category of science in an effort to join hands with to government initiatives, targeting on encouraging students to pursue science subjects.
“We are eager to ecourage and support Tanzania young students to be able to develop various innovative skills through science for the betterment of the nation,” she said.
Speaking of the YST scholarships, Ms. Eliavera said since 2012 the Foundation has provided 17 scholarships to students in the categories of overall winners and winners in special school in need.
“Every year KJF provide 4 schholarships to winner of YST awards to study at university level. We have already provided scholarships to students from Kibosho Secondary School (2012 – 3 scholarships overall winners); Ilongelo Secondary School of Singida (2013 – 2 overall winners scholarships); and Fidel Castro –Pemba (2013 – 2 special school in need scholarships),” Ms. Eliavera said.
Other scholarships were Lumumba Secondary School – Zanzibar (2014 – 2 overall winners); Ngongo Secondary School – Lindi (2014 – 2 special school in need scholarships); Mzumbe Secondary School – Morogoro (2015 – 2 overall winners); Nasa Secondary School – Simiyu (2015 – 2 special school in need); Mtwara Girls (2016 – 2 overall winners); and Binza Secondary School – Simiyu (2016 – 2 special school in need scholarships).
However, Ms. Eliavera said, KJF is planning to launch a dual Masters’ degree in African Cinservation at the University of Glasgow, Scotland and Nelson Mandela University – Afican Institution of Science and Technology in Arusha.
The programme, according to her, is for two years and KJF will provide three scholarships for students to study two terms at Glasgow University and eight terms at Nelson Mandela University.
“The Foundation has been giving scholarships to Doctors to graduate for a Masters’ degree programme in Paediatric Oncology at Muhimbili University of Health and Alllied Sciences (Muhas), two doctors graduated in 2015 and one in 2016,” Ms. Eliavera said.
The Honorary Chairman of Karimjee Jivanjee Group of Companies in Tanzania, Hatim Karimjee said: “We are very honoured to support the Young Scientists Tanzania Award because we believe that education is very important to the future development of Tanzania, and also because science education in particular can open opportunities for higher level career development.”
KJF is the primary vehicle for the Karimjee family’s charitable work.
The mission of the Foundation is to invest in education as a means to enhance the economic development of Tanzania.
At present, many young Tanzanians continue to benefit from scholarships from KJF, which enable them to follow their dreams and to make a greater contribution to Tanzania as a result of their education.
In addition to these scholarships, the Foundation also supports Read International and others; works with Wonder Workshop and is working to boost the capacity for management of pediatric oncology in Tanzania.
Hatim Karimjee said, although KJF’s main focus at the moment is funding educational institutions to improve education capacity, the Karimjee family established several charitable trusts in the 1950’s before independence.
“We have built many schools, hospitals, dispensaries, mosques and community centres. The most famous of our donations is the Karimjee Hall. We built and donated this building to the Dar es Salaam Municipal Council in 1957 as a Town Hall. It was later adapted to become the official seat of Parliament. Independence was declared in Karimjee Hall on 9th December 1961,” he said.
Other important donations by the Karimjee family have been the Usagara Secondary School in Tanga (Formerly Karimjee Secondary School), the Karimjee Clin in Mnazi Mmoja – Dar es Salaam, the old Karimjee Hospital in Zanzibar and the recent donation of 100 desks to Mkwakwani Secondary School in Tanga, a donation that was made to support the Government’s effort to offset the existing countrywide shortage of desks in primary and secondary schools.
The Karimjee Jivanjee Foundation is funded by donations from Toyota Tanzania, one of Tanzania’s biggest and compliant taxpayers, which is celebrating its 50th anniversary as the sole and authorized Toyota distributor in Tanzania since 1965.
(Prepared by www.maendeleovijijini.blogspot.com)